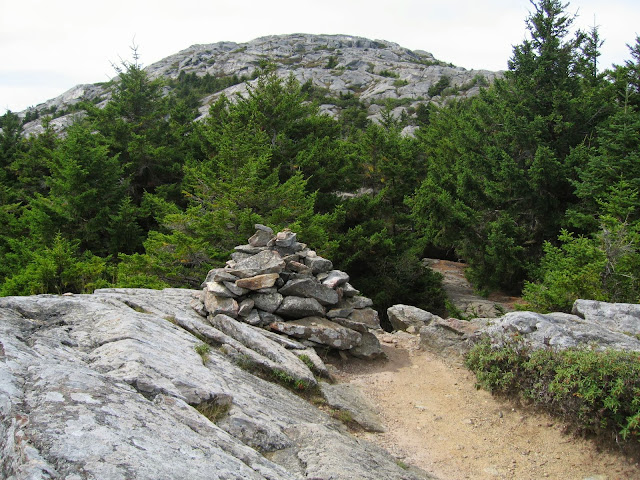 On September 9, 2013 I set off for the first of 4 hikes up Mount Monadnock in Jaffrey (and Dublin), NH. As mentioned in an earlier blog post, the word monadnock is an Abenaki-derived word loosely translated as "mountain that stands alone," although the exact meaning of the word (what kind of mountain) is uncertain. The term was adopted by early settlers of southern New Hampshire and later by American geologists as an alternative term for an inselberg for any isolated mountain formed from the exposure of a harder rock as a result of the erosion of a softer rock that once surrounded it. At 3,165 feet, Mount Monadnock is nearly 1,000 feet higher than any other mountain peak within 30 miles and rises 2,000 feet above the surrounding landscape.

I took the White Dot Trail to the Red Spot Trail via the Cascade Link, turning onto the Pumpelly Trail to the summit. This was a strenuous and steep hike with a lot of scrambling over and among rocks and boulders. As I approached the Pumpelly trail above the treeline and the summit, the painted blaze trail markers gave way to cairns. A cairn, an example of which is in the foreground in the image above, is a human-made pile or stack of stones. Since pre-history cairns have been built for a variety of purposes: as landmarks or monuments, as astronomical markers or ceremonial altars. In North America their most common use is as trail markers for hikers and/or bikers in places where the trail may not be so evident such as in moorlands, deserts, tundra, or above the treeline on mountains.

The appearance of the cairns which are in abundance on Monadnock redirected my thinking away from the summit. While I am climbing these mountains to get to the top, it is becoming increasing clear to me that the summit is nearly beside the point. The point is the walking (or scrabbling, clambering, mountain-goating, or sliding on my butt). The cairns, in serving as a reminder of this, had me paying close attention to them; their individual form, size, structure, and relationship to other aspects of the landscape around them. That may sound like I was looking at them as sculpture, but art was not on my mind in these instances. Each cairn, this one short and squat, that one elegant and symmetrical, this one nestled among larger rocks, that one seeming to grow vertically from a large slanting stone, seemed to me to be representative of the person who made it. They became talisman-like, general and specific at once... participants in an act of ritual. And this is what the hikes feel like they are becoming... ritual enactments. In this spirit, after sitting still with them for a bit, I photographed every cairn I encountered.

Here is a sampling (there are 15 images): 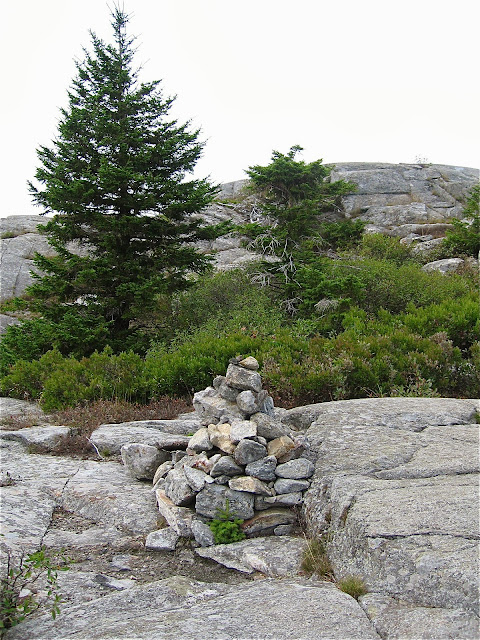 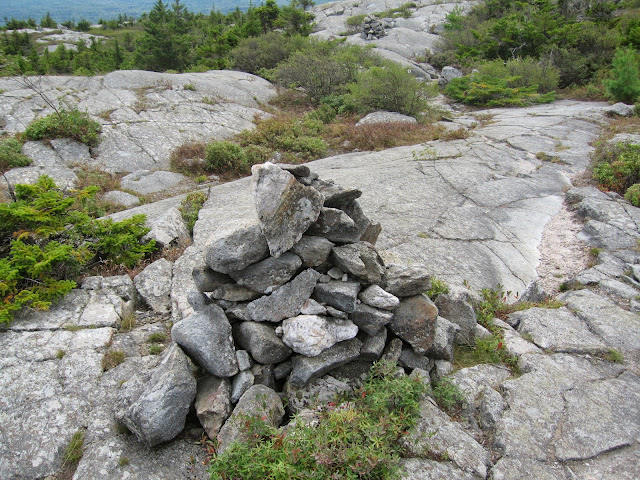 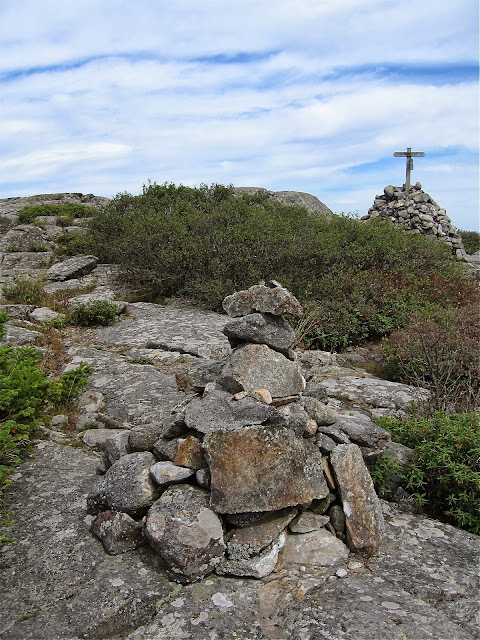 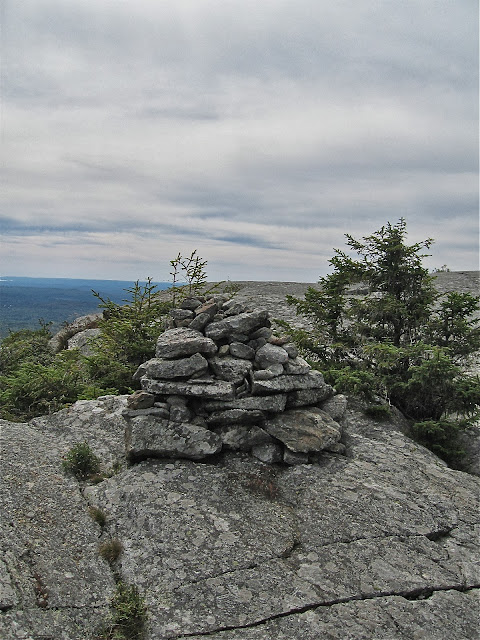 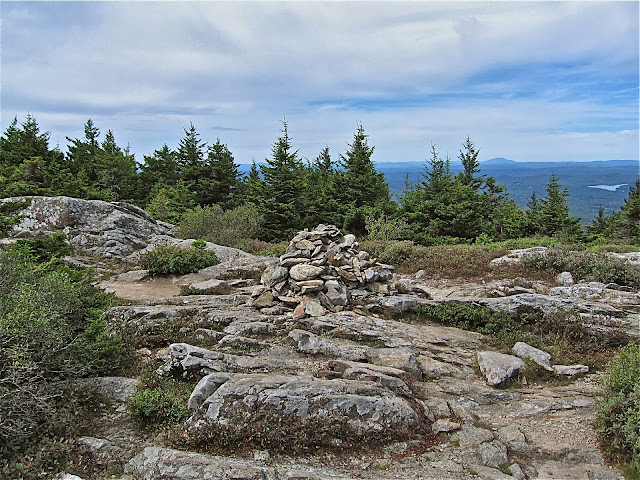 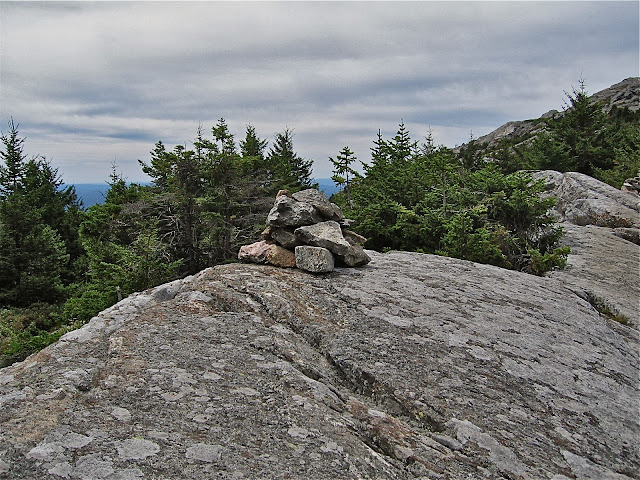 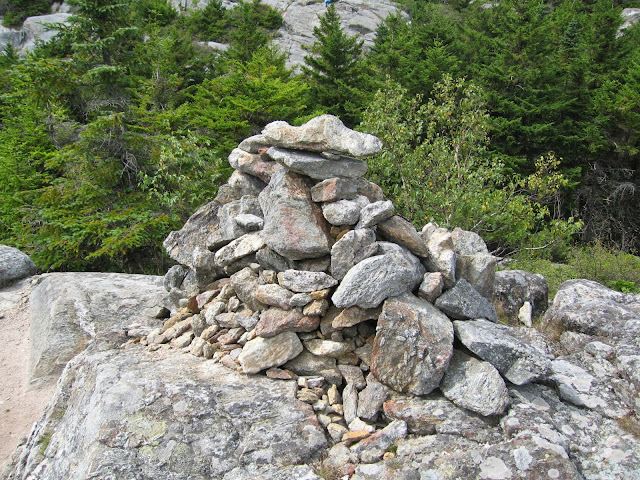 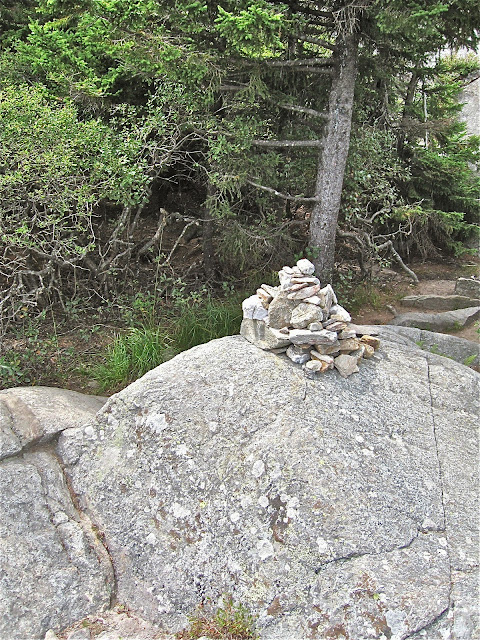 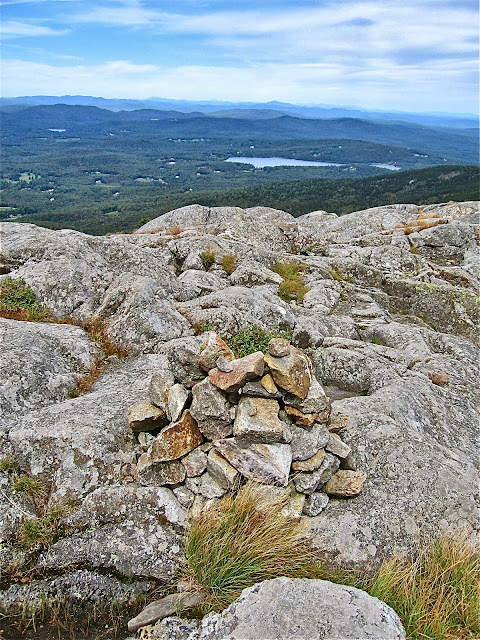 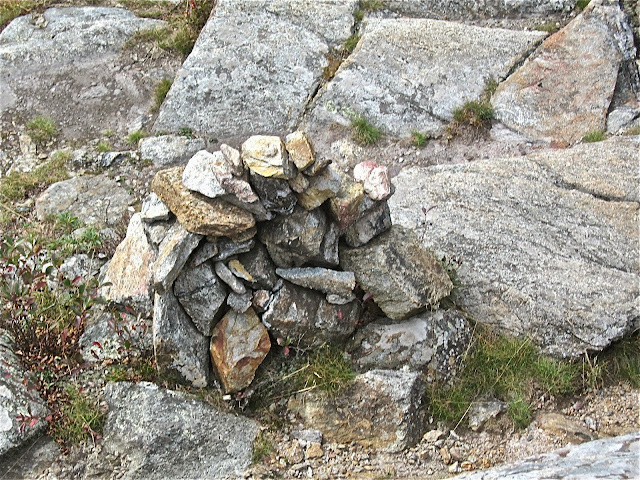 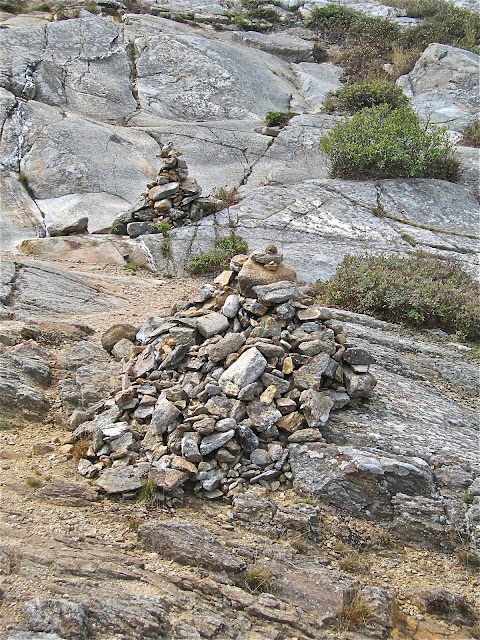 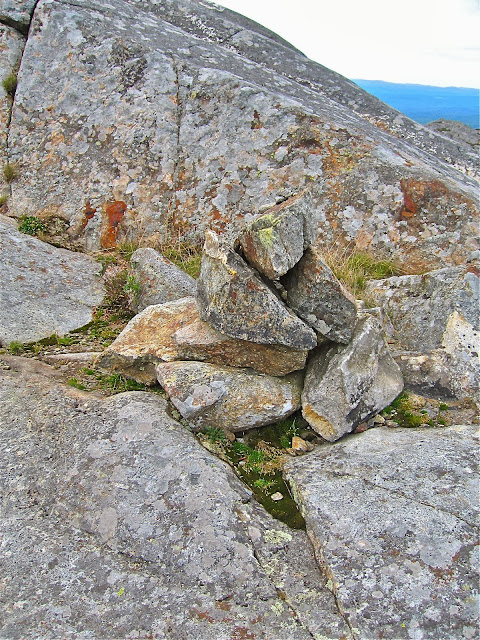 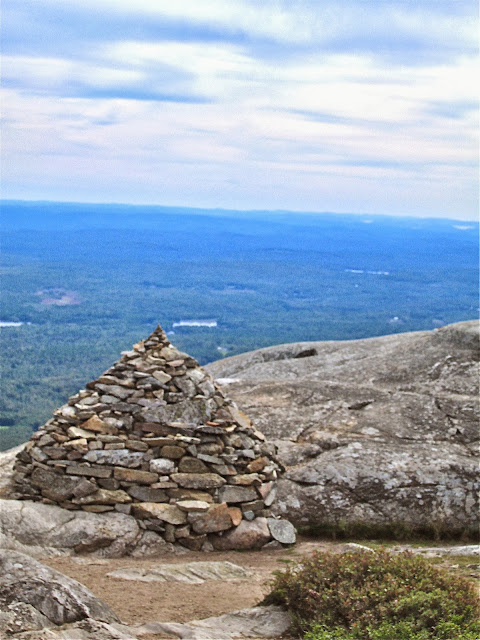 I have read that this mountain is the second most climbed mountain in the world behind Mount Fuji in Japan. According to the park rangers, Mount Monadnock is the 3rd most climbed mountain following Mount Fuji and Mount Tai in China. Regardless of whether or not this is true, fact or legend places Monadnock in the company of some of the most sacred peaks on the planet. Mount Fuji is one of Japan's three holy mountains, along with Mount Tate and Mount Haku. Mount Tai is one of China's Five Great Mountains. It is associated with sunrise, birth, and renewal, and is often regarded the foremost of the five. Mount Tai has been a place of worship for at least 3,000 years and served as one of the most important ceremonial centers of China during large portions of this period. These are places of pilgrimage. Is Monadnock, also the site of a pilgrim's journey? Am I, then, a pilgrim?

Henry Thoreau, a self-described nature mystic, returned to Monadnock 3 times after his initial trip in 1844. Monadnock was quite dear to him. It is not a wild peak like Katahdin in Maine (more on this mountain in the next post), but a peak that has been used recreationally/socially since before his visits. He commented on the names chiseled on the summit (humans always feel the need to leave a mark). So what is it that drew him and draws others (including me) repeatedly to this place? Yes, there is excellent, challenging hiking to be had on Monadnock, but that can be found in myriad places. I think it is in the going, the walking, the being in one's body in a particular place, enacting a ritual that brings one into an intimacy with oneself. Not the self that goes to work, sits in traffic, and sleeps in front of the TV, but the larger self that contains all and is contained by all, and the attempt to bring some of that presence into one's everyday life. Eihi Dogen, the 12th century founder of the Soto school of zen, wrote that zazen (sitting meditation) is the ritual act of awakening. Is this walking, scrabbling, clambering, mountain-goating, sliding on my butt not also thus? This is the question I will take with me as I continue to climb.